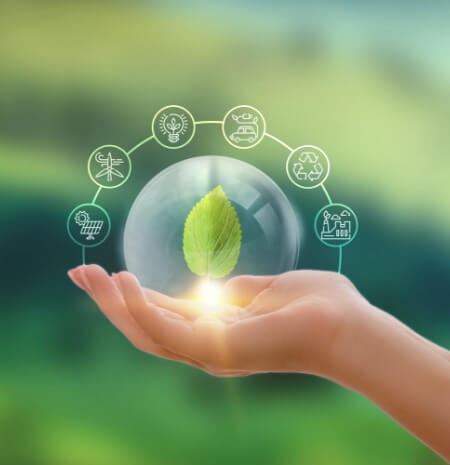 With conscious mind of responsible and paying attention to the environment and the surrounding community, NPS, a part of Double A Power Group, decided to choose clean technology to produce electricity, in particular by adopting steam boilers as the heart of production process.

NPS Power Plant adopts Circulating Fluidized Bed (CFB) technology, which has been well accepted worldwide because of its versatility and capacity of burning several type of fuels and still able to controlling the emission values much higher than the standards specified in Thai law.The combustion of the CFB boiler takes place at controlled temperature of 850 degrees Celsius which helps reducing nitrogen oxides(Nox) and thereby prevent pollution. Stage air distribution in CFB boiler.Combustion is complete and help controlling Carbon Monoxide (CO2) below 130 PPM: Part Per Million as against standard of 350 PPM.Similarly, emission of Sulfur dioxide (SO2) is controlled below 450 PPM (Standard is 640 PPM) by injecting lime stone and also by using proper fly ash absorption system. The ash generated after the combustion does not go as waste but used in production of cement.

Our power plants also pay close attention in taking care of controlling dust emission. Fuels being used in our power plant are 4 stored in cover shed for avoid dust spillage. Electro Static Precipitator (ESP) is installed in the boiler for collecting the dust from the gas released though stack. These ESPs are designed for 99.5% collection efficiency of dust from gas. Our Project is also equipped with fuel gas circulation system which draws part of the flue gas from stack and sends back to boiler for helping combustion, thereby making the emission better which results in safety air quality. Our plants stack is equipped with Continuous Emission Monitoring Systems (CEMs) for continuously measuring the quality of air being emitted from smoke stack.

When you visit our website, it may store or retrieve information on your browser, mostly in the form of cookies. This information might be about you, your preferences or your device and is mostly used to make the site work as you expect it to. The information does not usually directly identify you, but it can give you a more personalized web experience. Because we respect your right to privacy, you can choose not to allow some types of cookies. Click on the different category headings to find out more and change our default settings. However, blocking some types of cookies may impact your experience of the site and the services we are able to offer. More Information
Accept All

Always Active
These cookies are necessary for the website to function and cannot be switched off in our systems. They are usually only set in response to actions made by you which amount to a request for services, such as setting your privacy preferences, logging in or filling in forms. You can set your browser to block or alert you about these cookies, but some parts of the site will not then work. These cookies do not store any personally identifiable information.

These cookies allow us to count visits and traffic sources, so we can measure and improve the performance of our site. They help us know which pages are the most and least popular and see how visitors move around the site. All information these cookies collect is aggregated and therefore anonymous. If you do not allow these cookies, we will not know when you have visited our site.
Confirm My Choices